Last year we worked closely with Brain Candy films providing kit & crew on this ambitious and visually stunning commercial for British Policing. We thought it'd be really interesting for James - Creative Director for Brain Candy Films and Cinematographer for this shoot to give an insight into the production from their perspective, below are his thoughts...

We were tasked by creative agency Tinker Taylor to create an insight into the demanding and diverse role of modern day policing in England and Wales and challenge the public perception of British policing.  The role of the police is constantly evolving and officers are increasingly expected to perform many different duties on a daily basis.  Our film tells four captivating stories that show a broad variety of police activity and which demonstrate how vital the role is within our communities.  Their role is not just to police but to care, comfort support and respond in an ever changing world.  They are ordinary people doing extraordinary jobs.

We wanted to create a film that would really grab the audience’s attention so each story is told by seeing a frozen moment in time.  Each moment is a single, continuous shot that allows the viewer to take in every glorious detail of the four scenarios.  Putting the emphasis on the people behind the uniform, we created a realistic insight into the complexity and urgency of police work, taking the viewer on a journey of emotions as we focus on everyone involved in a singular, explosive moment.  This approach allowed us to put the viewer right in the middle of the action, highlighting the cohesive efforts of the police and all the officers involved at one crucial moment in time.  By creating a frozen moment in time it allows the audience to feel a mixture of emotions before we reveal the true nature of the scenario. 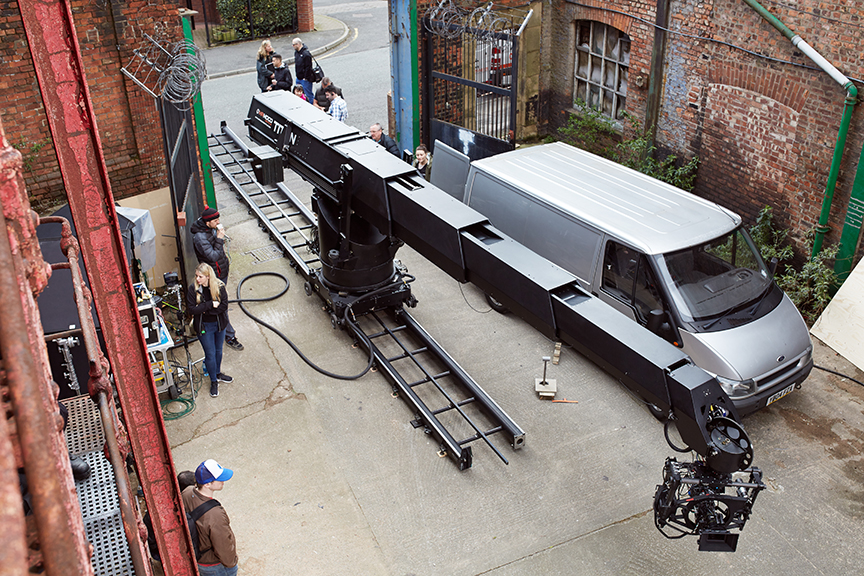 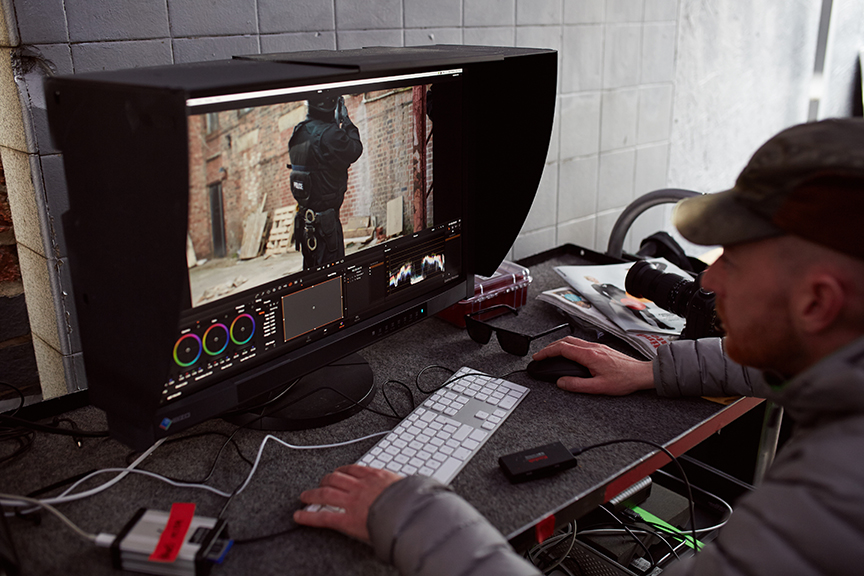 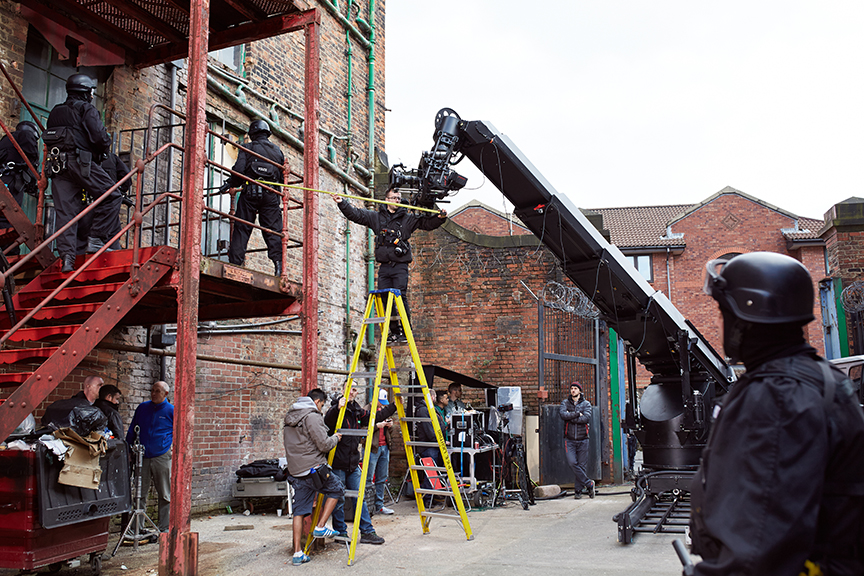 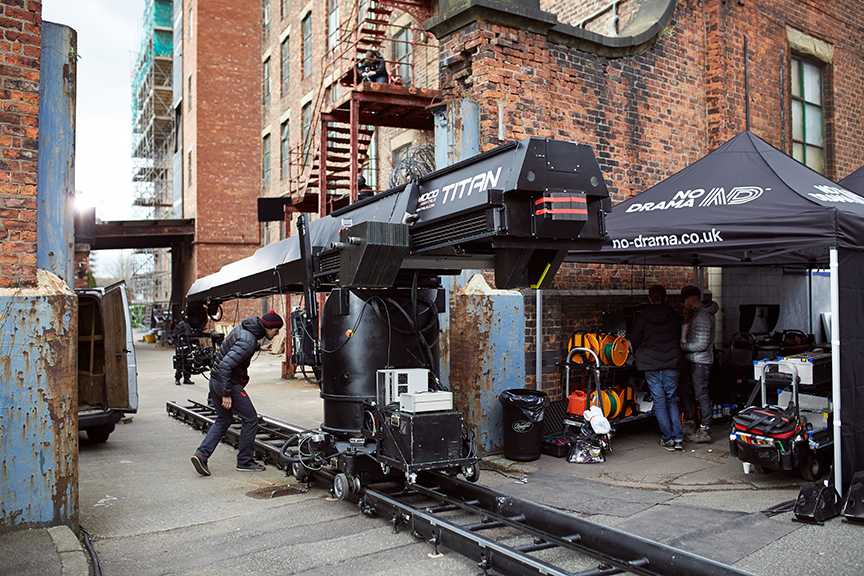 In three of the scenes we used motion control to move through the frozen action in a smooth, fluid path.  This allowed us to drip feed information to the viewer.  As we move through each scenario more information is given to the audience, which allows the scene to slowly unravel and the big picture to come into focus.

We’ve used cinematic visual language to grab the audience’s attention and keep them glued to the screen as they watch each scene unfold, but we’ve grounded the films in realism with meticulous production design.  Everything from the props, to the costumes and the lighting has been rigorously designed to give the feeling that we have witnessed a real moment in time.  Careful and precise art-direction and seamless CGI effects give complete authenticity to the scene. 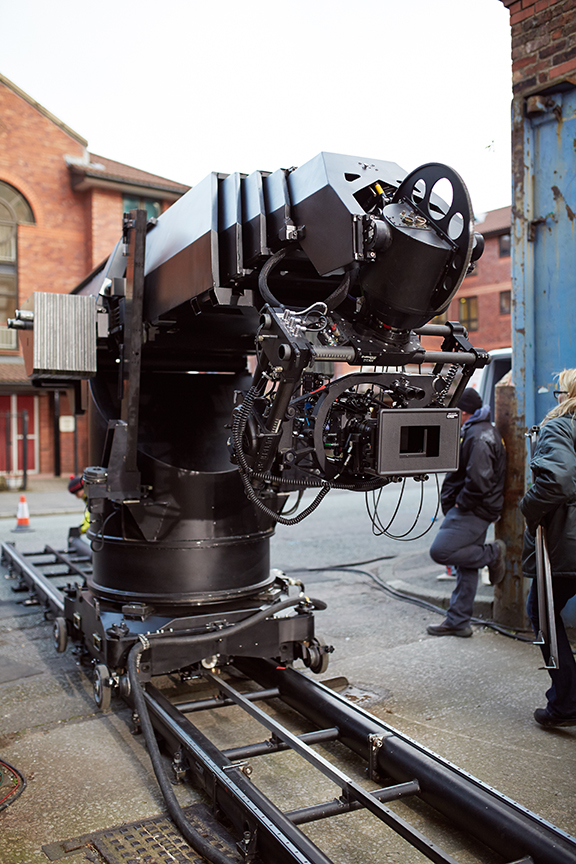 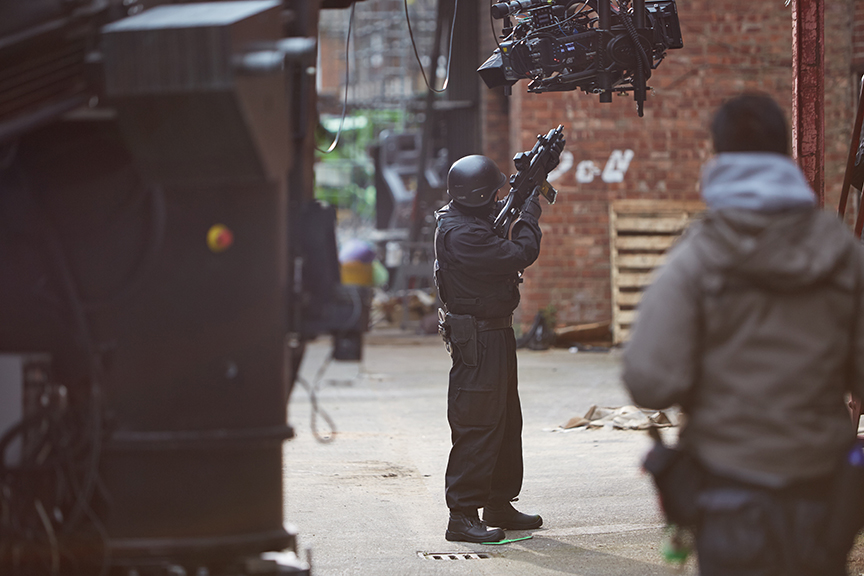 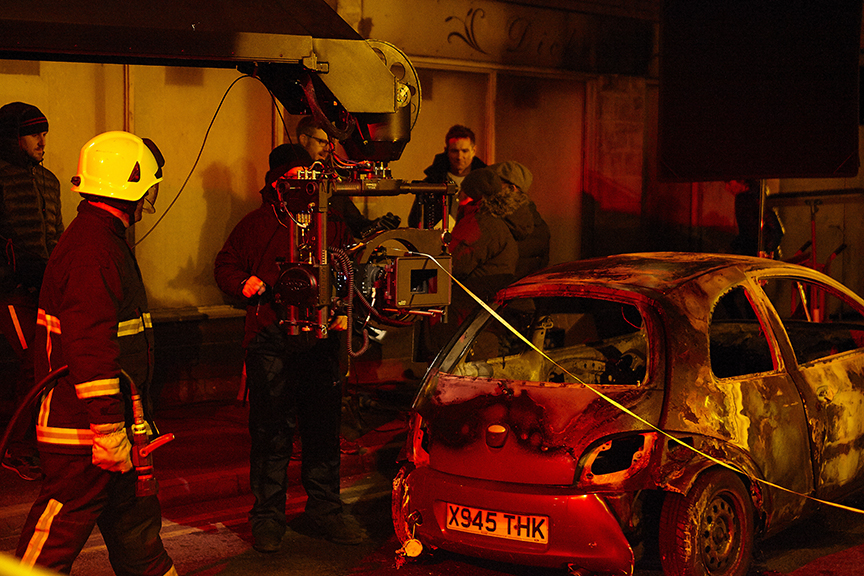 Three of the four scenes were shot on Alexa using motion control rigs supplied by Mark Roberts Motion Control, with the fourth scene being shot on RED Dragon with steadicam.  Cinematographer James Stoneley chose to use a combination of the Talos and Titan motion control rigs on the shoot, as each of the scenes had its own unique challenges.  The reason we chose to use motion control is that it allowed the camera to follow a perfectly orchestrated, pre-determined path through the action.  We were able to cover huge areas, change the camera level and repeat the move perfectly, making tweaks every pass until we were happy.  One of our main aims with this film was to capture as much in camera as possible and rely on CGI as little as possible and the level of precision that motion control gives you, meant that we could fill the frame with real details and just CGI to supplement what was already there.  CGI was handled by Flipbook and the fact that we were able to do multiple passes meant that they had clean plates to work from, which dramatically reduced the VFX workload.

The mighty Titan was used in two of our four scenes, the Raid and the Riot, where we needed that 9m extension to cover a lot of ground.  It allowed us to convey the scale of the situation and create the sense of a cohesive effort between the police and the community.  Whilst it may take a lot of careful planning and preparation, it is unrivalled in its abilities.  For example, in the Raid the camera booms out of a van, passes along a street, down an alleyway and up passed a team of armed police officers on a fire escape, before descending back to ground level to land on a person being arrested.  There is simply no other way we could have captured these scenes without the Titan.

I have worked with the Talos before so this was an obvious choice for the House scene.  This scene was shot on set but space was still a consideration because of how we chose to film it.  In order to make it feel like we’re really stuck in the corridor with the officers in the midst of the commotion at the beginning of the scene, we wanted the camera to physically be inside the walls of the set and we also wanted to be able to look back at the end of the scene and see the corridor walls.  This meant building a set with a “floating” wall that could be swung in and out of the set, allowing the Talos and camera to pass through the corridor where the wall ends up.  This took some careful choreography from our stage hands!

I chose to mix formats between Alexa and RED primarily because of the Street scene.  I chose the Alexa over the RED initially because neither of the optical low pass filter choices available for the RED would have been suitable for the nighttime Riot scene, due to it being low light but with the potential for point sources in the frame.  Then after plotting each scene out I realised that we wouldn’t be able to shoot the Street scene on motion control because of the dynamics of the camera move that we wanted to capture, it just wasn’t physically possible so I knew it had to be done on steadicam.  Given that we knew we would need to do a lot of takes and that we were going to shoot at 100fps and move the camera as quickly as possible, I wanted to give the steadicam operator a fighting chance, so we opted for the RED.  We shot at 4K for this scene to give us extra room in the image for stabilisation, which was essential to try and match the movement with the other scenes.  I was very confident that the two formats could be matched well in the grade.

As for lenses I chose to shoot with a mixture of Leica Summicron-C and Arri Alura.  The Alura 15.5-45 was our go to lens for plotting the shots out because it gave me a chance to try different focal lengths whilst we were designing the move with the motion control rig.  Once the move was dialled in and I’d made my choice of focal length we would then substitute the Arri for the corresponding Leica, get sharps and then start shooting.  However, on one occasion we chose to stick with the Alura so that we could incorporate a slight zoom into the camera move.  The Leicas were superb, they gave a beautiful crisp image but weren’t overly sharp and unforgiving in that digital way.  Plus they’re also very light which was a key factor in choosing them because when you’re fully extended on the Titan, the world’s largest motion control rig, every extra ounce can mean more unwanted bounce in the arm. 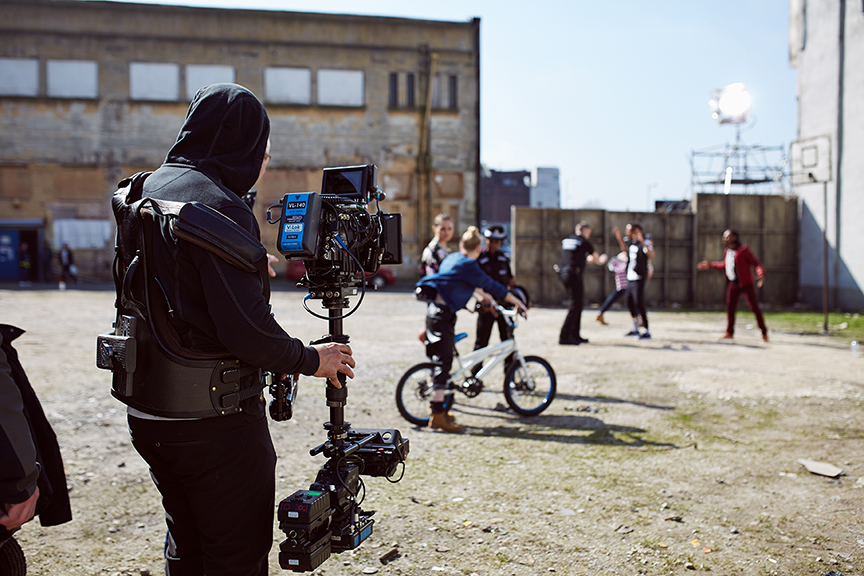 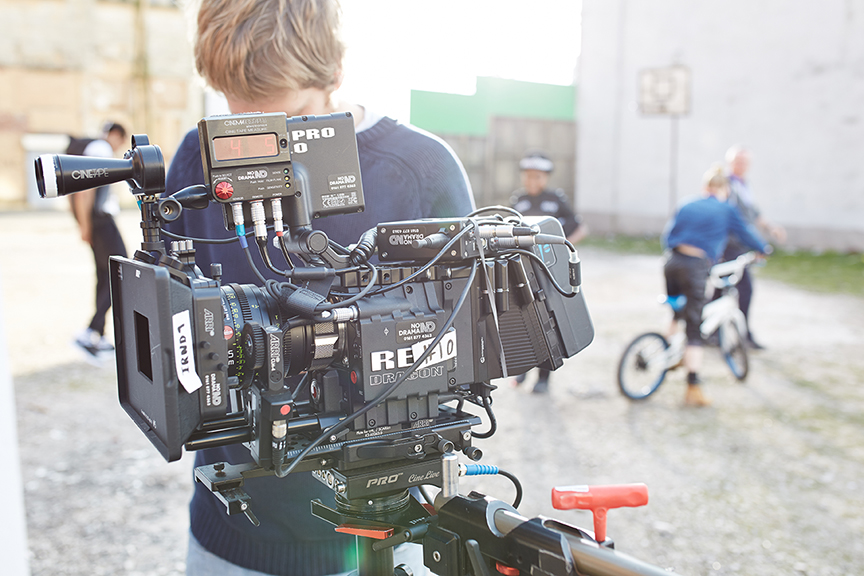 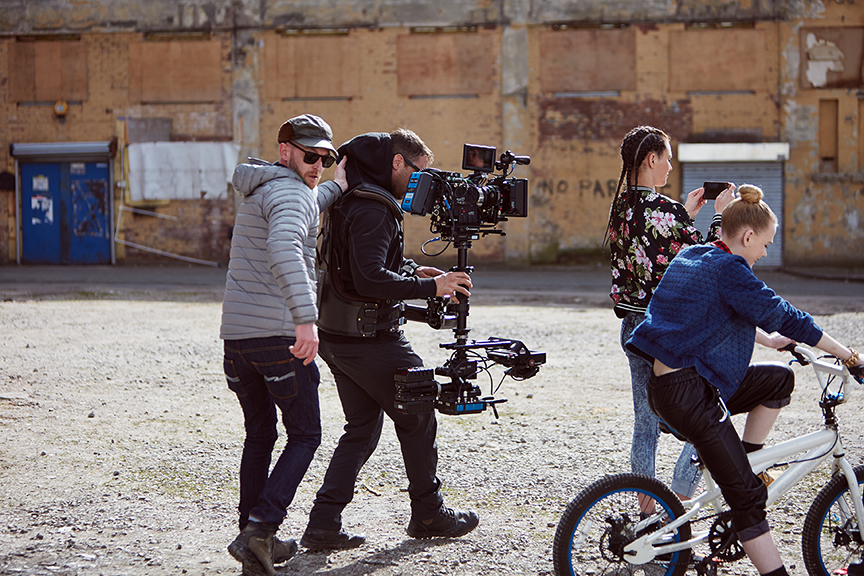 The four individual films are playing in cinemas across the country in over 800 feature presentations.